CLEVELAND, Ohio (September 30, 2018) – Cleveland’s revamped and re-energized waterfront was fully realized this weekend, and the sport of sailing, team racing to be specific, was the featured attraction. The 2018 U.S. Team Racing Championship for the historic George R. Hinman Trophy, hosted by The Foundry, Cleveland’s Community Rowing and Sailing Center, came to an exciting finish on Sunday after three days of intense competition in Cleveland Harbor and Lake Erie.

The winning team, Boss, composed of mostly Hobart and William Smith Colleges alumni sailors stole the show on Sunday to capture the elusive Hinman Trophy. Boss featured Greiner Hobbs (Terra Ceira, Fla.) and Miranda Bakos (Beverly, Mass.); Brian Clancy (Ithaca, N.Y.) and Catherine Riedman (Conshohocken, Pa.); and Johnny Norfleet (New York, N.Y.) and Chris Klevin (Westerly, R.I.). The three skippers, Clancy, Norfleet, and Hobbs are Hobart and William Smith alumni. Clancy is now the head coach at Cornell, Norfleet is the head coach at Fordham, and Hobbs was a finalist for the ICSA Sailor of the Year award in 2018. Boss last raced for the Hinman in 2016 where they placed third.

Boss sealed the title on Sunday afternoon with a thrilling 3-2 win over a team representing the College of Charleston in the Final Series. Boss jumped out to a quick 2-0 lead in the best of five series. The College of Charleston bounced back to win the next two matches to force a decisive fifth and final match to determine the winner. Despite lessening sailing conditions and oscillating winds in the afternoon, Boss pulled through in the end to capture their first Hinman Trophy. Boss and College of Charleston went head-to-head eight times this weekend with Boss going 5-3, including 2-1 in the Round Robin and Gold fleet races.

As the #3 seed entering the Semifinal Knock-out stage, Boss reached the Finals by defeating #4 Aquadisiacs, 3-1. They were perfect against Aquadisiacs in the previous rounds, 2-1.

Sunday’s racing featured stable 8 to 10 knots with gusts up to 15, and flat water for most of the day. However, the breeze was shifty. The breeze was blowing in over the land masses in the area making it difficult to read on the water. The pressure was down at the bottom of the course and up at the top marks.

Friday’s racing was set up nicely with cooperating wind directions from the south, southwest. The start line was organized about 100 yards offshore. Breeze ranged from 8 to 15 knots on mostly calm waters. The 12 teams tallied 132 races through the Round Robin 1 and 2 stages, and 77 races on Friday alone.

Saturday’s racing included a similar number of races after finishing the Round Robin 2 stage and nearly all of the Gold and Silver fleet races. Teams raced in less predictable conditions with fluctuating wind direction and speed (10 to 12 knots, gusts up to 15). The breeze shifted considerably throughout the day, especially in the afternoon.

The top six teams from the Round Robin stages advanced to the Gold Fleet, while the bottom six moved on to the Silver Fleet. Wins in the Gold Fleet were worth 1.5 points and the wins in the Silver Fleet were valued at 1 point. The top four teams with the most points from the two fleets advanced to the Semifinals. Points carried over from the Round Robin stages to the Gold and Silver fleet round.

Teams with exceptional boat handling, foot work in the boat, and overall speed faired well in the shifty conditions.

First held in 1981, the U.S. Team Racing Championship remains one of the hottest events in the country. This year’s Championship features an impressive list of accomplished teams and experienced team racers, many of whom have competed in and won this Championship in years past. From top-notch one-design sailors in fleet racing circles to current and former high-level college sailors and coaches, this US Sailing National Championship attracts a wide range of sailors, both men and women.

This premier team racing event in the United States is an invitational event. Interested teams applied by resume and international teams are invited to compete. The Championship is raced in three-boat/six-person teams (three skippers and three crews). Teams raced the 420E from Zim Sailing. The 420E features enclosed deck technology ideal for high school and college sailing.

Team racing is one of the most popular disciplines in sailing. Over 100 races can be sailed in just a few days. Races, or flights, are shorter than traditional race courses and are raced on a “Digital N” course. Three flights can race simultaneously with teams swapping out after each race with each team wearing a unique identifying pinny or bib.

The regatta was initiated by Sailing World magazine, and after years of growth and popularity, the event was adopted by US Sailing and became known as the U.S. Team Racing Championship for the George R. Hinman Trophy. The trophy was donated in recognition of George R. Hinman’s many years of service and contributions to sailing. 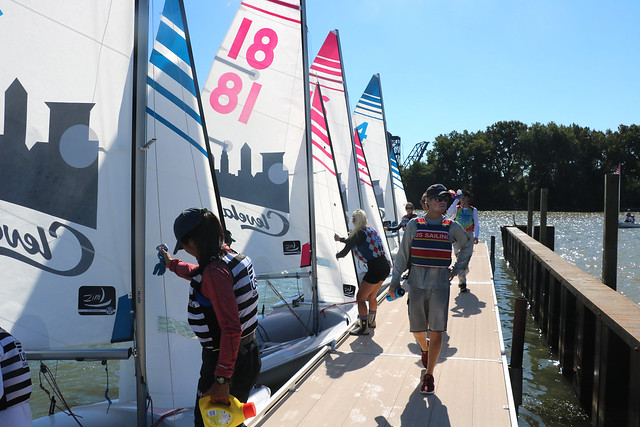 About Gill North America
Gill was an idea born on the water. In 1975 our founder, Nick Gill, was a keen sailor who utilised his father’s factory in Nottingham to begin production of truly capable sailing apparel. Kit that could be both protective and comfortable. We develop and test all our garments and we’ve grown to become one of the leading marine apparel brands in the world. We’ve equipped round-the-world teams when they’ve won prestigious ocean races, as well as Olympians to get them on the podium. Inspired by our nautical heritage we’ve also developed lifestyle clothing that can be worn anywhere, but which is still engineered with a marine pedigree. Today our garments utilise a range of cutting-edge technologies, from Activated Carbon baselayers to SuperFabric™, the most abrasive-resistant fabric in the world. At sea, saltwater comes at you from everywhere, so our clothing is tested in-house and on the water to withstand the very worst.

That means whatever environment you find yourself in – sea, shore or inland – we’ve already engineered the kit to perform for you. Contact: Tim DeWitt, Sales & Marketing Associate at tim.dewitt@gillna.com or 678-730-5597.