LASALLE, Mich. (August 10, 2018) – On Friday, over 90 sailors wrapped up a big week on Lake Erie and thanks to the countless volunteers from the North Cape Yacht Club these sailors enjoyed a fun and competitive week on the water with their peers. Friday’s racing produced three new champions at the 2018 Chubb U.S. Junior Sailing Championships, a US Sailing National Championship event.

John Pearce, Youth Director at US Sailing, was impressed by the athletes, the competition, and the host club, “The North Cape Yacht Club and all the volunteers did an amazing job leading up to, and during this event. We had very competitive fleets across all three disciplines, and great camaraderie and sportsmanship from the sailors. This event has sailors from every part of the country competing fiercely, but also sharing a common bond as American sailors at a US Sailing Championship.”

The Balboa Yacht Club’s David Wood (Corona Del Mar, Calif.) captured the Smythe Trophy in the Championship’s most closely contested event. Wood won by 14 points over Chapman Peterson (Winnetka, Ill.) who placed second overall. Lucas Sawin (Mount Pleasant, S.C.), who finished fourth at least year’s event, placed third this year. Wood wrapped up a great regatta on Friday with a scoring line of 5-7-2 over three races. He finished in the top five in seven of the 10 races this week.

The Laser Radials posted two races on Wednesday with Wood taking the earl lead by two points. He extended his lead to four points over Petersen through five more races on Thursday.

The top three eligible athletes in the singlehanded fleet will receive early acceptance to the 2019 U.S. Youth Sailing Championships.

Trevor Davis (Arnold, Md.) and Rider Odom (Arnold, Md.) of the Severn Sailing Association won the Bemis Trophy by a 21 point margin after two more races on Friday. They finished strong with a 5-1 scoring line. Placing second was Hamilton Barclay (West Boothbay Harbor, Maine) and Ella Beauregard (Southport, Maine). They moved into second place on Friday with a strong showing to close out the regatta (7-2). Last year’s runners-up, Jack Egan (San Diego, Calif.) and Jack Plavan (Park City, Utah), finished on the podium again, this time in third place. Davis and Odom won five of the 10 races this week.

There was little separation at the top of the leaderboard following Wednesday’s first three races of the Championship. The top four teams were separated by just one point each. Egan and Plavan had a one point lead. On Thursday, Davis and Odom surged in front from fifth place to take a 10 point lead after five more races. Egan and Plavan dropped to second place.

Wake got off to a strong start on Wednesday and took an early seven point lead through three races and a 2-3-1 scoring line. They extended their lead to 15 points on Thursday through five more races.

Sailors raced in the open waters of Lake Erie, approximately due east of North Cape Yacht Club. The sailing conditions on Wednesday included light offshore winds at 5 to 7 knots and flat water. On Thursday, there was a light offshore wind to start, building gradually throughout the day to 10 to 12 knots. On Friday, the winds were onshore and stronger, approximately 12 knots, with typical Lake Erie waves due to the new wind direction coming off the lake.

Sailors took part in onshore and on-water clinics with a collection of top coaches from around the country on Tuesday, August 7 to hone their skills and acclimate themselves to the racing conditions and the boats. Included in this year’s line-up of coaches was 2008 Olympic Gold Medalist and four-time Rolex Yachtswoman of the Year, Anna Tunnicliffe Tobias.

The following coaches were on site working with the sailors throughout the championship:

US Sailing’s oldest championship featured three days of racing for the historic Sears Cup, Bemis Trophy and Smythe Trophy beginning this Wednesday, August 8. These highly-skilled young sailors representing their home yacht club or local sailing organization tested themselves against athletes from around the country in single-, double-, and triplehanded competition.

First sailed in 1921, sailors compete regionally to earn an opportunity to race at this championship in one of three fleets. Competing sailors range in age between 13 and 18. Each Area is eligible to send at least one sailor/team to compete in each of the fleets for the 2018 event. 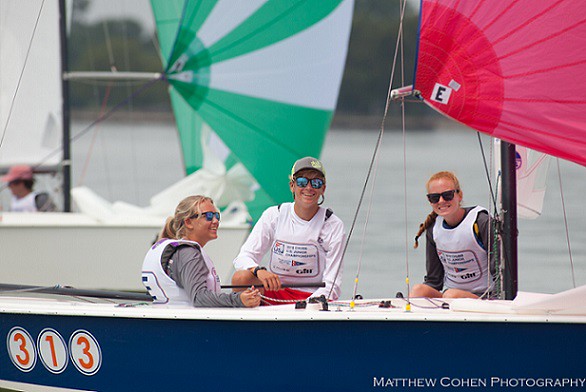 First race of the day on the Laser Radial course and we’ve got another clear start! #chubbchamps18 @ussailing pic.twitter.com/iV2gqWJvTh

Clear start on the Laser Radial course for race 2! pic.twitter.com/70pfbN8RJb

🍔 Do you smell hamburgers? || No doubt these Lightning class sailors are being well-fed by Chubb Junior Champs host club @northcapeyc || Head over to our Facebook page to watch LIVE! || Check our the score line with link in bio. 📷 @matthewcohenphotography

👄 pssst….you’re doing it wrong. || Racing starts this afternoon at the Chubb Junior Champs for the Sears, Bemis, and Smythe 🏆🏆🏆hosted by @northcapeyc stay tuned for some Facebook Live coverage later in the event. 💦📷 @matthewcohenphotography @chubbinsurance

🙋🏼‍♂️Who’s ready for the weekend? || 📺 Tune into our Facebook Live broadcast today and catch the action at Chubb Junior Champs for the Sears, Bemis, and Smythe 🏆🏆🏆|| Check link in profile for current scores. 📷 @matthewcohenphotography

This event is sponsored by Chubb Insurance Group and Gill North America. Chubb, a long-time supporter of this championship and youth sailing, has been title sponsor of the U.S. Junior Sailing Championships for over a decade.

About Chubb Group of Insurance Companies
Member insurers of the Chubb Group of Insurance Companies form a multi-billion-dollar organization providing property and casualty insurance for personal and commercial customers through 4,000 independent agents and brokers worldwide. Since its founding in the seaport district of New York City in 1882, Chubb has been a leading insurer of marine-related operations. Chubb provides comprehensive insurance and loss control services to private yacht clubs, marina operators and yacht owners. Chubb’s global network includes branches and affiliates throughout North America, Europe, Latin America, Asia and Australia. More information on Chubb may be obtained at www.chubb.com.

About Gill North America
Gill was an idea born on the water. In 1975 our founder, Nick Gill, was a keen sailor who utilised his father’s factory in Nottingham to begin production of truly capable sailing apparel. Kit that could be both protective and comfortable. We develop and test all our garments and we’ve grown to become one of the leading marine apparel brands in the world. We’ve equipped round-the-world teams when they’ve won prestigious ocean races, as well as Olympians to get them on the podium. Inspired by our nautical heritage we’ve also developed lifestyle clothing that can be worn anywhere, but which is still engineered with a marine pedigree. Today our garments utilise a range of cutting-edge technologies, from Activated Carbon baselayers to SuperFabric™, the most abrasive-resistant fabric in the world. At sea, saltwater comes at you from everywhere, so our clothing is tested in-house and on the water to withstand the very worst.
That means whatever environment you find yourself in – sea, shore or inland – we’ve already engineered the kit to perform for you. Contact: Tim DeWitt, Sales & Marketing Associate at tim.dewitt@gillna.com or 678-730-5597.