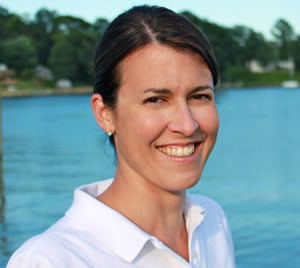 By: Jessica M. Mohler, Psy.D., CC-AASPClinical and Sport PsychologistUnited States Naval AcademyI am sure you have experienced this before: two sailors de-rigging at the end of the day, one has a smile on his face and seems excited about how he did on the water, the other appears upset as you hear him saying to his friend he only finished fifth. Or maybe as a parent, you have had one of your children celebrate on a windy day because she sailed around the buoys without capsizing, while your other child is upset with his second place finish. The post sailing day reaction shows us that success to one child can mean failure to another depending on their goals. Just recently I attended a post race meeting where a 10-year-old child was asked how his day was on the water. He replied, “terrible.” I sat there thinking about whether that child stated the day was terrible because he did not win or place high enough in the standings, or because he had made several mistakes and was swamped by a powerboat. I obviously hoped it was the latter. We define success and failure through achievement goals (Roberts & Treasure, 1996). It is an individual’s perception of his ability that helps to formulate his goals and then the perception of whether their goals have been met, which defines success and failure. For instance, two young sailors can have the same outcome, place fourth in their division, and have two different reactions. Determining whether you have been successful or failed can have a significant impact on a child’s confidence, their interest in sailing and lastly their effort and persistence with the sport. Ultimately it will dictate how well a sailor performs in the future and if she or he will stay in the sport. While some children are sailing this summer because mom or dad thought it was a good idea, some children will CHOOSE to come back next year because they enjoyed it and learned or improved a skill. Sport participation peaks around the age of 12 and then begins to decline. Research by Gould and Petchlikoff (1988) * suggests that this happens for three reasons: 1. Perception of competence (Am I a good sailor?) 2. Goal Orientation (Am I sailing to get better or to place at regattas?) 3. Stress (Am I having fun or do I worry too much every time I sail?)In one study of youth athletes, there were a number of reasons boys and girls wanted to participate including to have fun, to improve skills, to be part of a team, to get exercise, etc… but one reason that did not make the top 10 list for either boys or girls was to win. When children take pride in their progressive improvement of knowledge and ability relative to their past performance, they are more likely to continue sailing. However, when children compare themselves to others, and use a finish in a race as their only motivation, they are more likely to stop sailing. Many of you probably know the story of Michael Jordan. He was cut from the Varsity basketball team in high school, but continued to play on the Junior Varsity and improved his skills, making the Varsity team the next year. Could you imagine if he had stopped playing basketball? Youth skill development does not happen at the same time for each child. While one youth sailor may develop the skills necessary to perform consistently as a skipper in sailing by age 10, another child may not. Remember, just because that 10-year-old could not do well in races at age 10, does not mean he will not be a crew member on a Wednesday night series in the summer as an adult. As well, just because a youth sailor has success at age 10 in sailing around the buoys, does not mean he will want to go back to sailing camp next year. If he becomes too focused on his outcome and has a couple of bad regattas, the chance is pretty low. There are ways for parents and coaches to increase the likelihood that both kids will end up continuing in the sport of sailing, and goal setting can help.Creating goals that are focused on skill development verses outcome are important at all levels of sport. Even Division I athletes in college can get too caught up in outcomes, increasing their risk of quitting the sport because of what happens to most Division I athletes, they start losing when they get to college. They may have been the best in high school and now may be average, or even worse, riding the bench their entire freshmen year. Having the desire to win, but being able to focus on the skills and abilities necessary is ideal. I think many parents believe that their child’s focus on regatta finishes is some genetic trait that they have little ability to influence. However, parents have an incredible opportunity to guide their youth sailors to focus on what is important. Ginsburg, Durant and Batzell recommend a three step approach to setting goals for children to maximize not only their performance, but also their health and character:

2. Know yourself“As parents, we serve our children and ourselves well by becoming aware of our own emotional history, particularly as it pertains to issues of competition, achievement and athletics.” Parents can think about their own sports related behavior that was frustrating, upsetting or exciting and how those feelings can be triggered by their child. Knowing your own trigger points and telling your partner, may result in less negative emotional reactions to your child’s sailing performance.

3. Know your child’s sports environment“We must know the community we live in and its approach to sports.” Sailing is not immune to the unhealthy aspects of our society. Find a sailing program that fits with your family mission and be as diligent as you would be with any childcare provider or school.Once you have an awareness of these factors, it’s time to get your child involved. Parents of young children can ask them to draw a picture to show their goals: what they want to achieve this summer; what they want from sailing; what sailing or sailboat racing means to them etc. Encourage them to consider and incorporate all aspects of sailing and sailboat racing (e.g., skill improvement, meeting friends, enjoyment) into their pictures. Getting your youth sailor to draw their goals rather than write them will get them to think more broadly rather than just saying “I want to sail faster” or “I want to do my best.”For older children, take time to sit down and discuss what they hope to accomplish in sailing; what is their dream: to improve their skill, race in a regatta, make friends, have fun, etc… Once you know what they want to accomplish, ask them to think of 5-10 skills or abilities that are part of accomplishing their goal. Once you have your destination and a set of controllable skills or abilities, it is much easier to set goals that your child can accomplish, thereby building confidence. Finally, using the acronym SMART, write your goals down. – Specific: Identify the skill or ability– Measurable: Establish concrete criteria that can be measured– Attainable: Make the goal setting steps possible to complete in the time your child has.– Realistic: Based on your child’s strengths and weaknesses make sure the goal fits where your child is now. – Timely: Have a time frame for achievement so you can assess whether your child’s goals are being accomplished. While one child may dream of being part of a team and having fun on the water, you may identify the need to be friendly as a skill that your child has to develop. Using the SMART acronym, a goal of meeting one new person at camp for the next three weeks may be a great goal. For another child who is looking to increase her level of competition and dreams of racing at a national event, she may identify the need to learn how to accelerate quickly from luffing. She could create a goal to complete three starting / stopping drills of 10 minutes each over the next week. Ultimately, having success as a youth sailor is based on individual personalities, skills and abilities, it is an ever-developing process. While goal setting may take more time, helping our children get to their destination while creating opportunities for skill building and enjoyment has life-long rewards not only for our children, but for the sport of sailing. See you on the water!Dr. Jessica Mohler*References: Ginsburg, R., Durant, S. and Baltzell, A. (2006), Whose game is it anyway?Gould, D. and Petchlikoff, L (1988) Participation motivation and attrition in young athletes. In Children in Sport, 3rd ed, edited by F. Smoll, R. Magill and M. Ash (Champaign, IL; Human Kinetics)Roberts, G. C., & Treasure, D. C. (1996). Orthogonality of Achievement Goals and Its Relationship to Beliefs About Success and Satisfaction in Sport. Sport Psychologist, 10(4), 398-408.