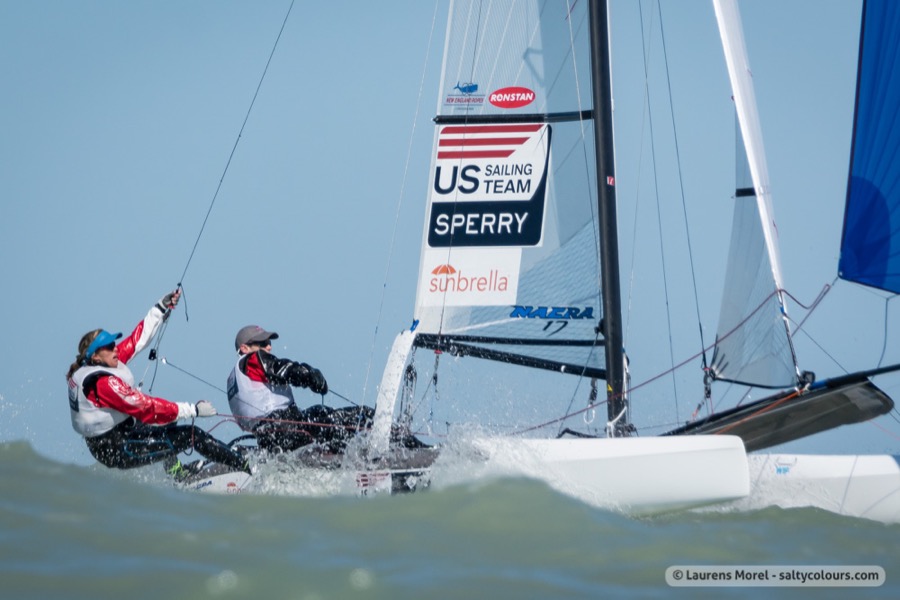 Clearwater, Fla. – The Gulf of Mexico can be an unforgiving playing field, a point that has been firmly reinforced by weather conditions over the first two days of the 49er, 49erFX and Nacra 17 World Championships. Day Two saw big breeze and even bigger waves return to Clearwater, and challenge US Sailing Team Sperry athletes and international competitors alike.

In addition to being the first Olympic-class World Championship held in the United States since 2010, the event serves as the second and final U.S. Olympic Team selection event in these three classes. 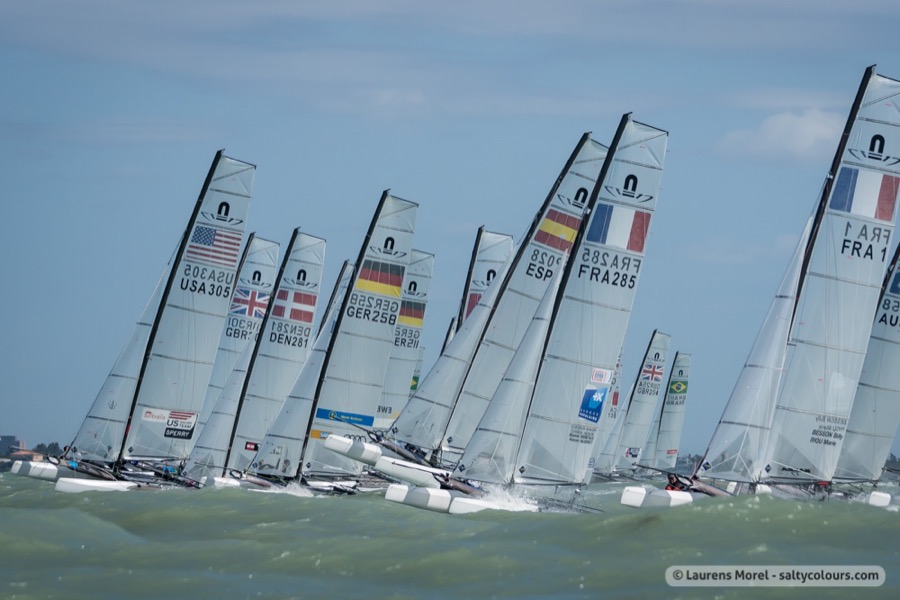 Michael Easton (Bedford, Mass.) and Katie Pettibone (Port Huron, Mich.) are the top American team after Day Two, and their highlight was a strong 7th place finish in the first race of the day. “Mike and I enjoy the big breeze,” said Pettibone, a veteran of three America’s Cup campaigns and two Volvo/Whitbread ocean races. “We’re generally happy with how we sailed, and definitely have room for improvement in these conditions. We like our [upward] trend.”

Easton noted that they tried to keep things simple, and manage risk as they dealt with the physical conditions. “Really, the plan was just to sheet in and sail fast. When [the compass numbers] were down, we tacked. When they were up, we gybed. We also wanted to make sure Katie, who got hurt racing last year, didn’t re-injure herself. It was exhausting, and we pushed hard, but that’s what Olympic sailing is about.”

Bora Gulari (Detroit, Mich.) and Louisa Chafee (Warwick, R.I.) showed flashes of top-level speed today, but had difficulty putting together complete races, said Chafee. “These were tough conditions for a new team, and they were not something we’ve had a chance to practice in before.” Chafee also noted that it was still earlyn on in the event. “It’s only day two of the regatta, and we’re four races in. We’re hoping for plenty more, and opportunities to move up.”

The two divisions of 49erFX athletes were sent out twice today, with the morning races cancelled after conditions were deemed to be too extreme. The second attempt at racing, made mid-afternoon, saw more manageable wind speeds but a roiling sea state that challenged the best skiff sailors in the world. One race was completed in each division, but two out of the three American boats ended up with broken masts, a fate shared by several other international teams.

In the Blue Division, the US Sailing Team Sperry’s Paris Henken (Coronado, Calif.) and Helena Scutt (Kirkland, Wash.) escaped back to shore with their rig intact, despite suffering a capsize during the race. “Before the race began, it seemed fine out there,” said Scutt. “It was around 12-14 knots of wind, but during the race it got windier. It wasn’t the wind speeds that were hard, it was the waves. The bottom line is that we knew it was going to be a crazy race for everyone, and we tried to survive.” Henken and Scutt finished 14th overall.

In the Yellow Division, both American boats suffered broken upper mast sections. The US Sailing Team Sperry’s Emily Dellenbaugh (Easton, Conn.) and Elizabeth Barry (Riverside, Conn.) crashed partway through the race, and were unable to finish. “We felt like the race wasn’t even that crazy, but we got a bit unlucky with the mast. People flipped all around us but somehow they kept their rigs.” Barry noted that in the 49erFX class it was crucial to have spare masts, and they’ll be ready to go tomorrow.

For Genny Tulloch (San Francisco, Calif.) and Maggie Shea (Chicago, Ill.), the breakdown came on the last leg. After righting the boat, the two veteran Olympic-class sailors were able to nurse the boat over the finish line in 14th place, and avoided the eight points that would have been added to their score had they not finished.

No races were completed on Day Two in the Men’s 49er, with the Race committee deeming the weather conditions to be too extreme. See the Day One report for a recap of how the top American teams are doing.

Racing will continue on Day Three of the 49er, 49erFX and Nacra 17 World Championship in Clearwater, Florida, with medal races being held on Sunday, February 14, 2016.

About The US Sailing Team Sperry

The United States Sailing Association (US Sailing), the national governing body for sailing, provides leadership, integrity, and growth for the sport in the United States. Founded in 1897 and headquartered in Portsmouth, Rhode Island, US Sailing is a 501(c) (3) non-profit organization. US Sailing offers training and education programs for instructors and race officials, supports a wide range of sailing organizations and communities, issues offshore rating certificates, and provides administration and oversight of competitive sailing across the country, including National Championships and the US Sailing Team Sperry. For more information, please visit www.ussailing.org