CHICAGO, Illinois. (October 21, 2018) – Pearson Potts (Newport, R.I.) won the Prince of Wales Bowl at the 2018 U.S. Match Racing Championship after three days of intense racing this weekend in Chicago. Potts and his all-american crew won the overall Championship this year after claiming the title of National Champions in 2017. Last year, Potts and his team placed second to David Storrs, the overall winner of the 2017 U.S. Match Racing Championship and the Prince of Wales Bowl.

The Windy City lived up to its name during the 51st U.S. Match Racing Championship, which finished up Sunday afternoon after three days of challenging conditions. The win-or-go-home tournament style whittled down the 10 invited teams in elimination rounds.

The regatta moved into quarterfinals, semifinals and finals on Sunday after heavy breeze on Saturday resulted in a short day. Sunday conditions in the Midwest were sunny and clear, with temperatures in the mid-to-low 40s and moderate breeze and puffs between 12 and 15 knots.

Returning to defend his 2017 title, Potts and the Yankee Creole Race Team including Bobby Savoie (Bristol, R.I.), Max Lopez (Red Bank, N.J.) and Bryce Kopp (Fairfield, Conn.), faced off against Chris Poole (Cold Spring Harbor, N.Y.) and crew Patrick Norris (Chicago, Ill.) and Will Felder (Woburn, Mass.) in the finals. If anyone was betting horses prior to the regatta, current national match racing rankings were a good indicator; Potts, ranked No. 3, was the reigning champion, while Poole is ranked No. 2.

The two duked it out in a contentious race in the round robin on Saturday that resulted in a black flag for Potts just after the start.

Potts continually trapped Poole out on the left side of the course on upwind legs during the final, gaining the inside and the lead around the windward mark in multiple races. Still, Poole was able to pull away downwind and keep a lead over Potts in the first two races. Potts and the Yankee Creole team came back to win the next two races, bringing out the full five races in the final.

Poole started the final race with a penalty after Potts pulled out a couple quick tacks and drew in Poole on a port-starboard crossing. The two were toe-to-toe at the first rounding, and both fumbled spinnakers on separate downwind attacks before splitting at the leeward gates. As the breeze picked up to 15-16 knots, Potts defended his championship and won the last race. Poole finished overlapped of Potts at the line still carrying a penalty.

“I didn’t feel like I was really defending the title during the regatta,” Pearson said after his win. “I had to really fight.”

“[In the] last race I was thinking don’t really need to re-invent the wheel,” he continued. “We started to really get our eyes attuned to the breeze and see it better on the water. We were happy just to take a split start and then just sort of pick apart the shifts. We came up lucky on the start and drew out a penalty. That really gave us an insurance policy at the end.”

Pearson’s crew also wasn’t shy went it came to attire, donning trademark jerseys with the motto “One hull one dream.” Lopez also wore wing-tip shoes on Sunday, the result of a dare.

Both female skippers of the regatta, Janel Zarkowsky (Annapolis, Md.), who crewed for Dave Dellenbaugh in previous wins at the U.S. Match Racing Championship, and Nicole Breault (San Francisco, Calif.), the U.S. Women’s Match Racing Champion for the past three years, were knocked out on Sunday during the quarterfinals.

Also knocked out early in the quarterfinals was hometown skipper Peter Holz (Chicago, Ill.), who was taken out by Potts after a close battle in three races.

After completing most of the round robin on Friday, tough conditions on Saturday tested competitors and race organizers alike. Many competitors kept a “fleet-racing first” mindset, as one side of the course could yield 3 knots of breeze, while another could hold 25 knots. Early in the morning, winds started off at a sustained 20 knots, but a front moving quickly brought in gale-force winds before noon, with some puffs hitting nearly 45 knots early in the afternoon, according to Ray Groble, CYC event chair and umpire. Wind direction clocked around at least 60 degrees throughout the morning, according to race committee.

“It blew us off the course,” Groble said.

On a short course, Chicago Yacht Club organizers were able to complete the round robin before bringing the Sonars back to shore for a break as a wintry mix of rain and snow came in.  At around 1:45pm CT, on-the-water Director Jay Kehoe at CYC announced the regatta was done for the day after toying with the idea of kicking off the quarterfinals in the south end of Monroe Harbor.

“The windy city lived up to its reputation––a little hail and little snow… awful,” Kehoe said.

Most sailors were not disappointed by the decision, which would have brought on racing without spinnakers in the heavy––and incredibly shifty––breeze.

“It was a little blustery today,” Poole said Saturday. “We really only want to race if there are kites. Unfortunately, its match racing so a lot of passing happens on the downwind, and when you run jib and main only it becomes pretty parade-type sailing and not a lot of accelerations and lot less chances with the hoists. There a lot [fewer] variables to let the trailer come back. And this is the match racing championship.”

The day also resulted in an “inordinate” amount of penalties, according to umpire Peter Neilsen. Heavy winds and tight finishes brought out the competition among racers.

In one exciting round robin race, Breault, who started in second and carried a penalty, gave Holz a run for his money after the Chicago team had a couple fumbles with the spinnaker. With gusts above 30 knots, Breault’s team sailed downwind with a raised jib in addition to a spinnaker.

“One of the reasons to keep it up is when things get crazy with the kite it will prevent the kite from wrapping around the forestay,” Breault said. “Another reason is we are the trailing boat, and we had the penalty and we needed to engage. Keeping the jib up would allow us to be ready for the next maneuver.”

Despite the smart move by Breault, Holz, who is hailed by some as the “most aggressive match racer” on the course and known for “using the rules as his sword,” defended his position.

“It was scary coming off the line even if you were ahead,” Holz said of the shifty course. “Leads were short-lived, and people were never really out of races.”

The Chicago Yacht Club met the conditions head on, with umpires and regatta organizers taking care to keep racers safe in the brutal Saturday conditions and working to keep the regatta moving along swiftly on Sunday.

The winning team earns a berth into the 2019 U.S. Match Racing Championship and an invitation to the 2019 Flicker Cup in Long Beach, California.

“We really love doing mono-hull stuff, and we like it because it’s easy for everyone to come out to the yacht club and pick up the sonar and go out match racing,” Potts said. “We appreciate the model because it’s less stressful for everybody rather than the really expensive cat boats that are hard to get involved.”

“Thanks so much to these guys, they made it happen,” Potts said, gesturing to his crew. 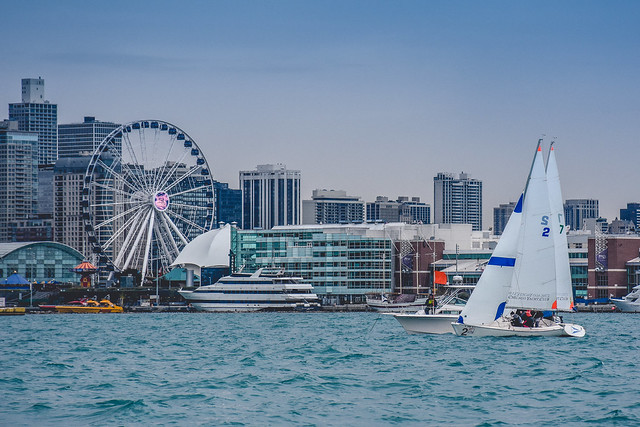 About US Sailing
The United States Sailing Association (US Sailing), the National Governing Body for sailing, provides leadership, integrity, and advancement for the sport in the United States. Founded in 1897 and headquartered in Bristol, Rhode Island, US Sailing is a 501(c) (3) non-profit organization. US Sailing offers training and education programs for instructors and race officials, supports a wide range of sailing organizations and communities, issues offshore rating certificates, and provides administration and oversight of competitive sailing across the country, including National Championships and the US Sailing Team. For more information, please visit www.ussailing.org.

About Gill North America
Gill was an idea born on the water. In 1975 our founder, Nick Gill, was a keen sailor who utilized his father’s factory in Nottingham to begin production of truly capable sailing apparel. Kit that could be both protective and comfortable. We develop and test all our garments and we’ve grown to become one of the leading marine apparel brands in the world. We’ve equipped round-the-world teams when they’ve won prestigious ocean races, as well as Olympians to get them on the podium. Inspired by our nautical heritage we’ve also developed lifestyle clothing that can be worn anywhere, but which is still engineered with a marine pedigree. Today our garments utilize a range of cutting-edge technologies, from Activated Carbon baselayers to SuperFabric™, the most abrasive-resistant fabric in the world. At sea, saltwater comes at you from everywhere, so our clothing is tested in-house and on the water to withstand the very worst.

That means whatever environment you find yourself in – sea, shore or inland – we’ve already engineered the kit to perform for you. Contact: Tim DeWitt, Sales & Marketing Associate at tim.dewitt@gillna.com or 678-730-5597. https://www.gillmarine.com/us/

About Regatta Ginger Beer
Regatta is a brand premium craft mixers using the finest natural ingredients to create distinctive flavors. Our flagship product – Regatta Ginger Beer – comes together with notes of ginger and hints of citrus to make an extremely clean tasting and refreshing ginger beer that’s perfect for mixing cocktails or enjoying by itself. Regatta craft mixers and sodas are non-alcoholic, non-gmo and gluten free. Regatta Ginger Beer was awarded the 2017 “Platinum Medal” in the prestigious International SIP Award competition and was also the 2017 Consumer’s Choice Award winner. Regatta has been deeply rooted in supporting the sport of sailing since it’s inception and is proud to be the Official Ginger Beer of US Sailing.