The gulf between the boats used for high school and collegiate sailing in the United States and the Olympic classes has never been larger. At the same time, the hunger among top collegiate sailors to sample the next level remains strong. The remarkable resources of Oakcliff Sailing, an official US Sailing Team Sperry Training Center, enabled US Sailing’s Olympic Development Program to give more than two dozen college sailors exposure to three high performance Olympic classes and top-flight Olympic coaching.

On the second weekend in June, 28 top collegiate sailors converged on Oyster Bay for a four-day clinic on how to sail the 49er and 49erFX skiffs and the Nacra 17 catamaran. Clinic Director Richard Feeny was joined by veteran Olympic-class sailors Sarah Newberry, Zack Maxam and Mac Agnese. Too much wind on the first and fourth days of the camp kept the majority of the teams onshore, but the middle two days featured perfect training conditions and everyone was able to get a lengthy taste of the thrills and challenges of Olympic-class sailing. 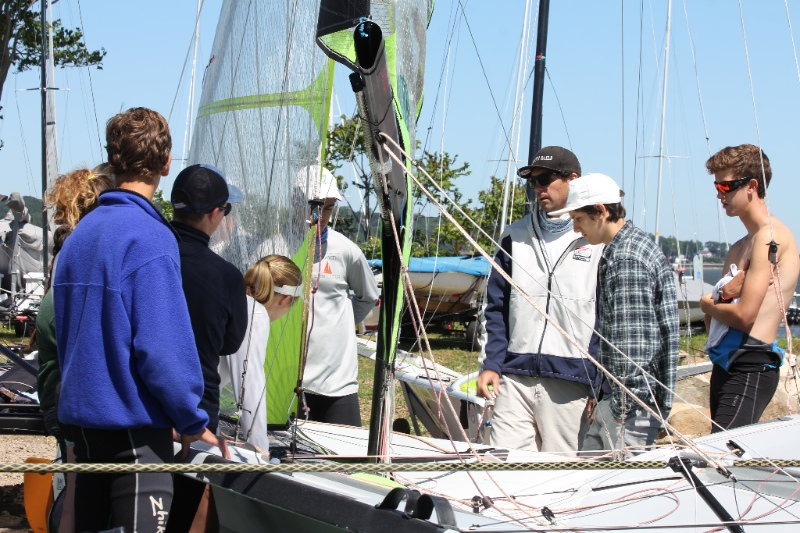 “With this clinic, we’ve combined two amazing resources, the ODP and its focus on getting great coaches in front of interested sailors, and Oakcliff, which is an amazing resource in so many ways. The access to these Olympic-class boats is just fantastic.

“College sailors today, they’re pretty serious athletes. There’s a lot of excitement in matching these young adults to these adult boats for what is—for most of them—the first time in their lives. Often the exposure is enough. But our message is clear: if this is something that you’re interested in, then stay in touch, come back in August. And here are these other opportunities, a clinic, a regatta you can do in the next three to four months. Here’s as much of a road map as we can provide. 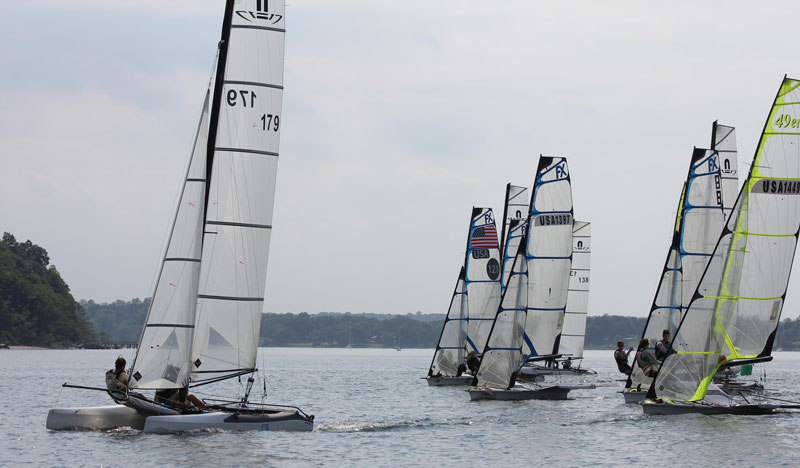 “We rigged 13 boats, so with 28 sailors, that meant just two were sitting out and getting hydrated at any one time. The first day was blown out, but didn’t really matter because it’s really about getting each rigged and that’s part of the curriculum. Then we just charged it from Friday noon through Saturday evening.

“These sailors are so hungry for knowledge. After the official debriefs ended, the sailors all gathered around Nacra 17 sailor Sarah Newberry and just peppered her with questions. There’s clearly a deep interest in the subject matter, and that’s just so exciting from a coaching perspective.

“The 49er is such a difficult boat to sail. Good coaching gives the sailors the confidence and technical knowledge to be able to succeed in their first day. When I was growing up, we’d rig it and fumble around for a while. This is the benefit of good coaching.

“The catamarans are a little bit easier since they’ve got significantly more inherent stability. But the great thing about having somebody like Sarah, with all her knowledge of the class, is she’s able to pull a group together and get them all to the same speed in a very short period of time. It goes right back to a primary tenet of the ODP, getting the right coaches in front of the right sailors.

—Richard Feeny, Youth National Coach
Athlete Feedback
“So many people get locked into whatever boat they’ve been sailing since they were 14 or 15 and stick to that class or one like it through the Olympics. It’s tough to feel like you’re improving and learning something when you’ve been sailing the boats for that long. I love getting in new boats, especially hard ones. It’s so rewarding to be able to figure things out again. That’s what got all of us to love this sport, seeing your effort so clearly pay off in either results or execution. Everything is tons of fun in these boats, even flipping on a tack in 5 knots.”
—Nic Baird
“The camp exceeded my expectations in several ways. I expected a clinic geared mostly towards beginners. I learned the basics a few years ago, so I was ahead of most participants. But the coaches were able to accommodate a range of skill levels. I learned a lot and met many fantastic sailors that I hope to compete with in the future.

“I was lucky enough to start skiff sailing young. Simply sailing the boat is not easy, and I spent a long time just figuring out how to keep it upright. Some people find this stage discouraging or frightening, and find other boats to sail. For me, the bruises were worth it. I love skiff sailing.” 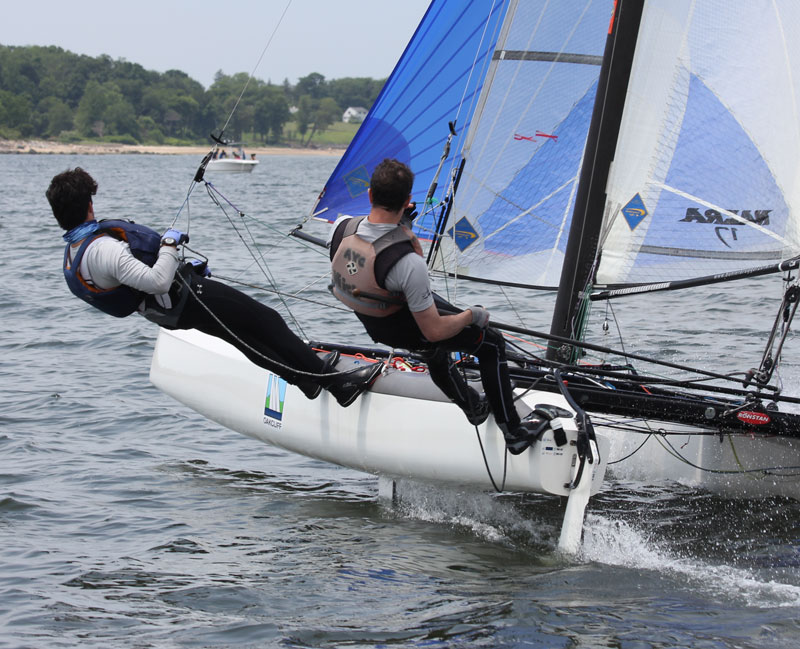 “I have sailed F18s a little bit in the past and found the Nacra 17s to be quite similar. The 49ers, on the other hand, were a completely new animal. They were a handful, but I found it very enjoyable sailing a boat that was difficult even to get it around the marks. It’s a very satisfying feeling when you have a good jibe or even just when you’re able to bear away without pitch poling.”
—Nick Sertl