WAYZATA, Minn. (Sept. 29, 2018) — Michael Hanson (Wayzata, Minn.) and crew turned a 56-year drought on its ear this weekend when they won the 63rd U.S. Adult Sailing Championship. They didn’t just turn it on its ear, they ran it over, back and forth.

Hanson, Tim Siemers (Maple Grove, Minn.) and Mark Swift (St. Paul, Minn.) dominated the regatta, posting the low score of 53 points to win the coveted Mallory Trophy. They won six races and finished outside of the top three only three times in 20 races for an incredibly low average score of 2.7.

The Mallory Trophy has a mixed history of close finishes and blowouts. The past two years have been more on the blowout side, with victories by 11 and 13 points, and Hanson continued that trend. His 16-point margin of victory is the largest since a 21-point victory in 2011. Hanson and crew won the first four races and never looked back.

“We had great teamwork all weekend,” said Hanson. “Mark on the bow and Tim in the middle were rock solid. It was shifty all weekend so you had to stay in phase.

“Our game plan was to not make any big mistakes,” Hanson continued. “We came out guns blazing and won the first four races. We kind of kept the pedal to the metal on Day 2 and then played it a bit more conservatively the last two days. All in all, it was awesome.”

The winning trio represented the Inland Lake Yachting Association. An association of some 51 clubs across 10 states and the District of Columbia, the ILYA won the Mallory Trophy four years in a row, 1959-’62, with the legendary Harry C. “Buddy” Melges, an America’s Cup winner and Olympic Gold and Bronze medalist, winning the first three of those titles.

Although the ILYA hasn’t won since ’62, 28 years before the 28-year-old Hanson was born, he wanted to represent the ILYA to stem that drought. Hanson was “well aware” of the ILYA’s history and in particular Melges’ victories, whom he views as an idol.

“I’ve heard stories of Buddy looking back on those victories as a springboard to his career,” Hanson said. “He’s a bit of an idol in the ILYA and I can only hope that this victory has a similar effect on my career.”

Hanson, who grew up sailing scows, is building an impressive résumé. He was part of the winning crew for the 2018 ILYA A Scow Championships and last year sailed aboard a Sydney 38 in the Sydney-Hobart Race where they placed first in Class C under the ORCi rating system and fifth under IRC. He has taught sailing in Australia, California and locally and locally as Race Director at the Lake Minnetonka Sailing School. Now he shares his name on two trophy placards with Melges.

“When I was 14 years old I won an X Boat regatta that he had won,” Hanson said of the popular one-design that is raced on lakes. “It’s an honor seeing my name on a trophy with his.”

The championship regatta was hosted by the Wayzata Yacht Club in Wayzata, Minn., just outside the Minneapolis/St. Paul metro area, and was sailed on Lake Minnetonka. The race committee ran a total of 22 races, with each of the 11 teams getting two byes in the series. Races were held on a windward/leeward course with the breeze ranging from today’s low of 6 to 8 knots to yesterday’s gusty, 20 knots.

While the race committee ordered no spinnakers for the final race, Race 17, on Saturday, today the regatta was welcomed by 40-degree (F) temperatures, prompting many to add yet another layer the three they wore the first three days.

“We had a little bit of everything,” said Hanson. “We were a little under weight in the heavy winds yesterday and were sort of just hanging in there.”

At the final awards ceremony the teams representing the Sailing Association of Intermountain Lakes from Colorado and the Hawaii Yacht Racing Association were together awarded the Staton J. Peele Sportsmanship Trophy, as voted by their regatta peers.

The HYRA crew was skippered by Maddy Kennedy (Honolulu, Hawaii), who grew up in the Wayzata area, and Robin Jackson (Littleton, Colo.) skipped the SAIL crew. Both teams were praised by their peers.

The two teams were commended for their great attitudes, fun-loving approach, regatta spirit, and friendliness. Both teams also demonstrated great sportsmanship on the course in some difficult situations, and while assisting the jury with protest resolution.

The Hawaii team was also recognized for having traveled the greatest distance.

The regatta organizers at the Wayzata Yacht Club put forth a fantastic event, one that will be remembered on many levels.

“Overall, the U.S. Adult Sailing Championship went about as smoothly as we could have expected,” said Odell Tuttle, Communications Chairman for the Wayzata Yacht Club. “The level of competition did not disappoint. The spectators and volunteers were excited to watch the battle for the top three spots, and were very impressed with the hometown team from ILYA as they captured the top spot.

“Our volunteers and staff really exceeded expectations. We owe them a big thanks,” Tuttle said. “We also thank the competitors for the camaraderie, competitive spirit, sportsmanship, and tolerance of the cold temperatures.”

The 2018 U.S. Adult Sailing Championship is sponsored by Gill.

A chilly start to final day of the U.S. Adult Sailing Championship. Only 40F when the RC took to the water pic.twitter.com/wirNFSSn04

Boats are heading out to the course for Day 1 of the US Sailing Adult Championship. #MalloryTrophy18 pic.twitter.com/6jFz0oOJ8d 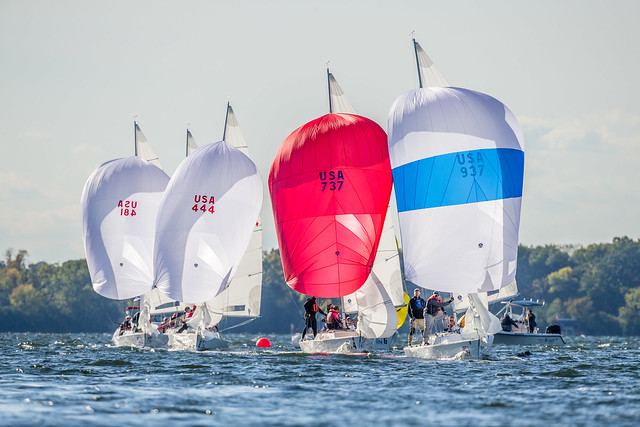 About Gill North America
Gill was an idea born on the water. In 1975 our founder, Nick Gill, was a keen sailor who utilized his father’s factory in Nottingham to begin production of truly capable sailing apparel. Kit that could be both protective and comfortable. We develop and test all our garments and we’ve grown to become one of the leading marine apparel brands in the world. We’ve equipped round-the-world teams when they’ve won prestigious ocean races, as well as Olympians to get them on the podium. Inspired by our nautical heritage we’ve also developed lifestyle clothing that can be worn anywhere, but which is still engineered with a marine pedigree. Today our garments utilize a range of cutting-edge technologies, from Activated Carbon baselayers to SuperFabric™, the most abrasive-resistant fabric in the world. At sea, saltwater comes at you from everywhere, so our clothing is tested in-house and on-the-water to withstand the very worst. For more information, please visit www.gillmarine.com/us/.