— For Draheim victory is second as skipper at Championship of Champions, third overall

ACWORTH, Ga. (Oct. 21, 2018) — Bill Draheim (Royse City, Texas) and Rod Favela (Heath, Texas) rode a string of three victories in four races to win the 44th Championship of Champions regatta, a US Sailing Championship event. Hosted by the Atlanta Yacht Club and raced in the Y-Flyer, Draheim and Favela won with the low score of 22 points, good for 23-point victory.

After previously winning the championship in 2002, Draheim, 58, becomes the sixth two-time winner of the Jack Brown Trophy. Draheim also won the championship a third time, crewing for Paul Foerster in 1987. It’s a regatta he estimates he’s raced six times now.

“Everything went our way,” said Draheim, the owner of Gus Sails (Rockwall, Texas). “I like this regatta. Getting a chance to race against other national champions is great and to win it a second time is right up there for me.”

The victory is the latest for Draheim in what has been a triumphant 2018. Draheim has enjoyed great success in the MC Scow class, where he won the National and Midwinter championships. In his career he has won the National Championship of five one-design classes, including twice in the Flying Scot, and twice has also been a finalist for the US Sailing Rolex Yachtsman of the Year award.

With Draheim and Favela dominating the leaderboard, a fierce battle ensued for second place. In the end, James Bowers (Winchester, Mass.) and Julia Marsh Rabin (Salem, Mass.) rose from a tie for fourth into the silver placing with 45 points. Mike Ingham (Rochester, N.Y.) and Paul Abdullah (Jacksonville, Fla.), among the pre-regatta favorites, finished third with 49 points.

Draheim and Favela gained entry to the regatta by winning the 2017 VX One North American Championship. The 19-foot VX One is a similar boat to the 18-foot Y-Flyer in that has chines, hard angles on the hull which the boat leans against when heeling for stability.

Draheim, however, credited his experience racing on Lake Ray Hubbard at home in Texas as being a key to victory. The light and shifty conditions are similar to those this weekend on Lake Allatoona.

“I like the light and shifty stuff, it’s similar to what we get at home,” said Draheim. “The key is to stay patient. When the other side of the course looked good we didn’t go chasing it, we waited for it to come to us.

“Two races we went back after starting early, but it was shifty enough that we could work our way back up,” Draheim continued. “It wasn’t just the shifts but the velocity was up and down also. So, there were a couple of ways to get back in the groove.”

The regatta opened on Friday with Draheim and Favela pacing Ingham and Abdullah, who held a 4-point lead after the first four races. Then Draheim and Favela won Race 5, the final race of the first day, and followed it up with victories in three of the five races on Saturday to take a commanding, 19.5-point lead after two days. They closed out the regatta with a 4-2-1 in Sunday’s final day of racing.

For the series Draheim and Favela won six of the 13 races and also included two seconds and a third in their final scoreline.

“Bill was spectacular,” said Ingham. “There was a lot of die and fill stuff, where one side of the course would have breeze while the other didn’t. We sat in a lot of holes and watched a train of boats go by, and once it started you couldn’t get there. Bill had a knack of being in that train of boats if he was having a bad race. He always found way to claw back.”

Bowers was ecstatic about finishing second. He and Marsh Rabin began the final day in fourth but posted finishes of 2-3-2 to climb up to second.

“We’re feeling good about finishing second in such a deep and talented fleet,” said Bowers, who won the 2017 Snipe National Championship to qualify. “We’re damn excited. We were hoping for top 3 and we did that.”

Like Draheim, Bowers leaned on his experience of sailing on lakes to contend with Lake Allatoona’s tricky conditions.

“Once we got comfortable with the boat we got our head out and were looking at the shifts,” said Bowers. “That played to our strength, small lake sailing. You had to figure out which were the small shifts and which were the big ones. You had to have a lot of patience.”

Although the conditions were ever-changing on the water the shoreside hospitality never waned and Ingham, like Bowers and Draheim, praised the host Atlanta Yacht Club for an outstanding regatta.

“This is the definition of a good volunteer club,” said Ingham. “Everyone wants to be a good host and make you feel comfortable. We had a lot of home cooked meals and it was good home cooking.”

Draheim is dialed in — first around mark in race 9️⃣ ⛵️⛵️⛵️#CofCYFlyers pic.twitter.com/SZ8HfXB3oy 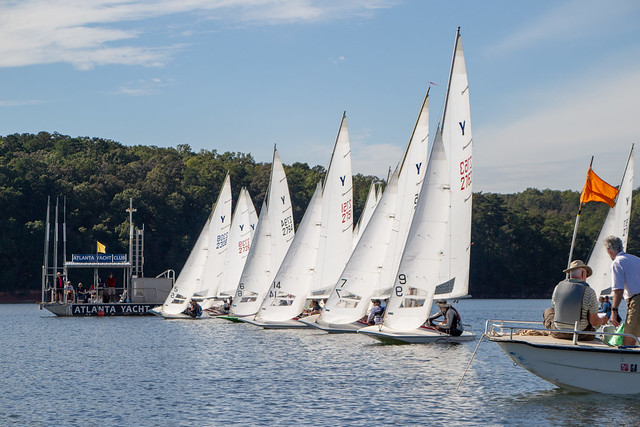 For final results, standings, photos, real-time updates on Twitter, and more information from the 2018 Championship of Champions regatta, please visit the event website.

The 2018 Championship of Champions regatta is sponsored by Gill.

About Gill North America
Gill was an idea born on the water. In 1975 our founder, Nick Gill, was a keen sailor who utilized his father’s factory in Nottingham to begin production of truly capable sailing apparel. Kit that could be both protective and comfortable. We develop and test all our garments and we’ve grown to become one of the leading marine apparel brands in the world. We’ve equipped round-the-world teams when they’ve won prestigious ocean races, as well as Olympians to get them on the podium. Inspired by our nautical heritage we’ve also developed lifestyle clothing that can be worn anywhere, but which is still engineered with a marine pedigree. Today our garments utilize a range of cutting-edge technologies, from Activated Carbon baselayers to SuperFabric™, the most abrasive-resistant fabric in the world. At sea, saltwater comes at you from everywhere, so our clothing is tested in-house and on-the-water to withstand the very worst. For more information, please visit www.gillmarine.com/us/.