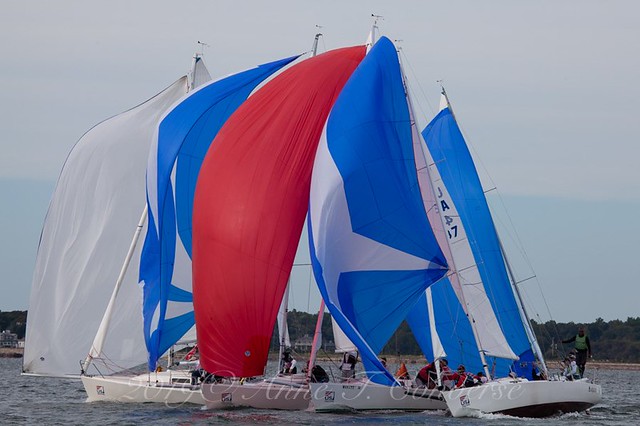 MARION, Mass. (September 8, 2019) – The 13 teams representing their Regional Sailing Associations were challenged by the fast-paced action with varying conditions on Buzzards Bay over four days at the 2019 U.S. Adult Sailing Championship for the Mallory Trophy, hosted by the Beverly Yacht Club. This year’s “Mallory” proved to be a US Sailing National Championship to remember. After 48 total races including six races in Sunday’s Stage 3 Final, a winning team was determined.

Loe and Trey Sheehan (Chagrin Falls, Ohio), of the Inter-Lake Yachting Association (I-LYA), each finished Sunday’s Stage 3 Final Round with 23 points over six races to place them in a tie atop the leaderboard. Loe earned the tie-breaker edge over Sheehan with their three first place finishes on Sunday over Sheehan’s one first place finish.

Crewing for Sheehan and the I-LYA this week was Brad Boston (Point Edward, Ontario, CAN), Curtis Florence (Ohio), and Tyler Black (Newport, R.I.).

The top eight teams started the Final Round with a point representing their Qualifying Place (QP).

This Championship was sailed using league racing, a fast and competitive format, featuring two flights with teams frequently rotating boats between races. Each team raced an equal number of races against the other competitors. Races were approximately 15 minutes in duration and race management ensured quick rotations with on-the-water judging.

Stage 1 included two rounds of racing for all 13 teams over Thursday and Friday (Day 1 and 2). Each team completed eight races per round with boat rotations. A total of 26 races were conducted over the first two rounds. Stage 1 determined the top four teams advancing to Sunday’s final Stage 3.

On Saturday, the Stage 2 Repechage round featured the remaining nine teams battling it out over six races to determine the next four teams, 5-8, advancing to Stage 3.

Strong winds with blustery conditions dominated the race course for most of Friday and Saturday, as remnants of Hurricane Dorian pushed north through the Atlantic Ocean. Teams raced in 15 to 20 knots with gusts in the 20s for most of Friday and Saturday. The breeze dropped considerably Saturday afternoon for the final two races of Stage 2. The wind was blowing in the low to mid-teens on Thursday.

John Loe (Chesapeake Bay YRA):
“We were racing for my grandfather this week who is not feeling well. I wasn’t sure I was going to make it here. That’s who we were racing for and that’s why we are here.”

Trey Sheehan (Inter-Lakes YA):
“It was fantastic sailing this week and we had a great time. Race committee did a great job and the Beverly Yacht Club threw one heck of a party.”

Ryan Seago (Detroit RYA):
“The best advice I could give out here is to keep it simple and don’t over think it. The course is always a new game for every start.”

Peter Levesque (Narragansett Bay YRA):
“We approached every race like a new challenge in the variable, shifting conditions. The fleet was very tight. You could drop five places at any one of the marks. It was very hard to go the other direction.”

“The racing format was interesting, but if your start is not there, it’s difficult to make anything back. Today it was
shifty, lumpy, and bumpy. Wind from the north and then the east, not the norm. No real advantage for the home team.”

“The racing format is like college sailing in a bigger boat and I am 56 years old, adding to the excitement.”

Through all the adversity and challenges the Beverly Yacht Club (BYC) has endured since the club was founded in 1872, the most important objective of the club remains true today – sailing comes first.

From the Great War and the Great Depression to devastating hurricanes through the years, the Beverly Yacht Club has stayed true to their original purpose – to promote sailing and good fellowship among its members, while welcoming visiting sailors.

The Beverly Yacht Club takes a great deal of pride in welcoming sailors from all over the world to their charming Buzzards Bay venue in Marion, Massachusetts. They have a long history of hosting the Olympic Trials, US Sailing National Championships, and other major sailing events. This week, the Beverly Yacht Club is playing host to the 2019 U.S. Adult Sailing Championship for the Mallory Trophy.

“We are here because we all love to sail, and it still is primarily a sailing club today. It’s all about the racing, cruising, and having fun on the water. We take pride in that. Running races is what we do. We run over 250 races from June through October for our members in five one-design and three PHRF classes five days a week,” said Pierce.

She also discussed how the club pulls together the necessary resources and volunteers to run these events throughout the busy sailing season.

“We have 54 sailors here at the Mallory and we have about 60 volunteers, not including the Race Officers, who we brought in from the outside. We have more volunteers than competitors and practically more support boats than boats racing. This allows us to run a world class event here on our little patch of water. This is what we do and we want to invite others to come sail here.”

MARION, Mass. (September 3, 2019) – Regional Sailing Associations (RSA) from around the United States will be well represented this week by a talented group of sailors competing for the historic 2019 U.S. Adult Sailing Championship, hosted by the Beverly Yacht Club. Thirteen teams will be fleet racing for the Mallory Trophy in the J/80 over four days on Buzzards Bay. Competition for this legendary trophy gets underway on Thursday, September 5 and wraps up on Sunday, September 8.

“Running races is what we do at the Beverly Yacht Club,” said Event Chair, Mary Pierce of the Beverly Yacht Club. “We run over 250 races from June through October for our members in five one-design and three PHRF classes five days a week. This year we also hosted the start of the Marion Bermuda Race and the Beverly Junior Regatta that had over 200 boats participating in 4 classes. We have the resources, experience and enthusiasm to ensure great racing for the sailors.”

Returning to defend the 2018 title is Michael Hanson (Deephaven, Minn.) of the Minnetonka Yacht Club and his team representing the Inland Lake Yachting Association and Area K. Hanson and his team dominated the regatta, hosted by the Wayzata Yacht Club (Minn.) and raced in the J/22, posting the low score of 53 points to win the coveted Mallory Trophy. They won six races and finished outside of the top three only three times in 20 races for an incredibly low average score of 2.7. His 16-point margin of victory is the largest since a 21-point victory in 2011. Hanson and crew won the first four races and never looked back.

Returning to crew for Hanson from the 2018 team is Mark Swift (St. Paul, Minn.), along with newcomers Maclean Potts (Hopkins, Minn.) and Judson Koehn (Minnetonka, Minn.).

Hanson is not the only returning champion competing this week. Charles Quigley (Winthrop, Mass.) of the Boston Yacht Club won this title in 2002 and 17 years later he hopes to capture a second Mallory Trophy. Quigley and his team representing the Mass Bay Sailing Association and Area A includes David Bryan (Boston, Mass), who won with Quigley in 2002, Kay VanValkenberg (Boston, Mass.), and William Colehower (Marblehead, Mass.).

Another local standout sailor will be on hand to challenge Hanson and the rest of the fleet. The 2018 J/80 North American Champion, Chip Johns (Mattapoisett, Mass.), will be a major contender for this year’s Championship. Johns will be sailing with Alex Gryska (Marion, Mass.), William Godfrey (New York, N.Y.), and William Marvel (Marion, Mass.). Gryska and Marvel sailed with Johns as part of the winning J/80 North American Championship team. Johns is representing the Southern Massachusetts Sailing Association, Area A, and is a member of the Beverly Yacht Club.

This Championship will be sailed using league racing, a fast and competitive format, featuring two flights with teams rotating every two races. Each team will race an equal number of races against the others. Races are approximately 15 minutes in duration. The host club ensures quick rotations and on-the-water judging, in addition to an improved viewing experience for spectators.

“We will be tested in conditions that we don’t regularly sail in,” said Hanson. “The J/80 is a new platform for us, with very few of them around the Twin Cities area. We managed to find one to practice on over the past few weeks, so we will be coming into the event as prepared as possible. One thing we like about the event format is the small courses and the fast-paced nature of the racing. It is a format I’m used to from both college sailing and match racing, so we look forward to bringing the smackdown on our competitors when things get tight.”

To drive more participation in the event and to improve diversity overall for the Championship there are several requirements per boat. Sailors under 30 make up 25% of the team and female sailors make up at least 25% of the team. A bonus is provided if a female is a helm.

The Mallory Trophy, a magnificent sterling silver tureen trophy, has a long and colorful history that dates to the Battle of the Nile in 1798. Racing for the Mallory Trophy was first held in 1952 as the U.S. Men’s Sailing Championship and transitioned to an open event in 1993. Since then it has become a more open and inclusive regatta, allowing female skippers and all-female crews. In reflection, the regatta was renamed the U.S. Adult Sailing Championship in 2013.

“It’s great to see so much enthusiasm here at the Beverly Yacht Club in anticipation of hosting this historic regatta,” said Jack Gierhart, CEO of US Sailing and Commodore of the Beverly Yacht Club. “The Beverly Yacht Club has a longstanding tradition of hosting major national and international regattas, including many US Sailing National Championships and Olympic Trials, and the club will add to its legacy by hosting its second U.S. Adult Sailing Championships this week on Buzzards Bay. I know the club is excited to welcome these talented sailors to this spectacular sailing venue.”

About Beverly Yacht Club
The BYC was established in 1872 and our purpose is “To promote yachting and good fellowship.”  We are proud of our active racing, cruising and junior sailing programs and fortunate to be situated on the western shore of Buzzards Bay, one of the world’s great sailing and cruising grounds. Along with our own racing schedule, we are proud to host the Buzzards Bay Regatta in even years, and to sponsor the Marion to Bermuda race in odd years. The club has also hosted dozens of regional and national championship events over the years as a result of a strong volunteer ethic, race management expertise among the membership, and a desire to support and advance the sport at all levels. Our cruising schedule is equally ambitious and you will see our burgees flying around the bay, the region, and occasionally around the world. Learn more about the Beverly Yacht Club at https://beverlyyachtclub.org/.