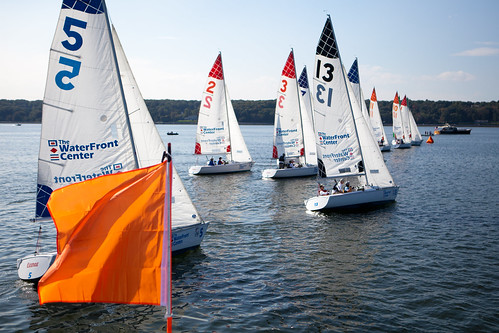 Thirteen one-design class champions were challenged over three days in the Sonar on West Harbor. In the end, Benjamin’s team slightly out dueled the 2010 Champion, Chris Raab (Huntington Beach, Calif.), to earn the Jack Brown Trophy for the first time in his illustrious career. Raab and his crew Robert Kinney (Newport Beach, Calif.) and Peter Kinney (Newport Beach, Calif.) had a lead through the first seven races of the championship. They qualified to compete for this title by winning the 2017 Lido National Championship.

Every year, US Sailing invites one special guest to join the competition. Benjamin received this year’s special guest invitation and his team made the most of the opportunity. Through 13 races they tallied 37 points and won the championship by five points over Raab. Benjamin won three races and placed in the top five 10 times.

“Today was the most exciting day of all because the wind was up to 15 knots and gusts up to 25 out of the Southwest with a little bit of rain coming through,” explained Benjamin. “It was a fantastic conclusion to what I believe was a wonderful championship because the competition was extremely tough.”

“Not only was this my first time sailing in the Championship of Champions, but I believe this is my first US Sailing National Championship,” he said. “I think this event is terrific and to have this format and the rotations equalizing the boats is great. US Sailing and the WaterFront Center pulled off an extraordinary event.”

“I’ve sailed with Chris and Phil in the past, but the three of us have not sailed together as a team. For us the challenge was to coordinate as a three-person team, as well as becoming familiar with the Sonar, which was new to us.”

“The light air in the first two days was tough-going because you need a lot of patience. Once the breeze came in, things got a lot easier.”

Benjamin is looking forward to more Etchells and TP52 racing this year.

US Sailing’s Championship of Champions is recognized as one of the more unique adult racing events in the country. All sailors qualified for this event by winning a one-design class National, North American, or World Championship in the qualifying years (2016 – 2017).

Thirteen sailors were selected to race for the Jack Brown Trophy while representing their respective classes. Teams took part in a special Sonar boat clinic and local knowledge briefing on Thursday.

Every year, US Sailing invites one special guest to join the competition. Invited helms have included winners of the Rolex Yachtsman and Yachtswoman of the Year, Olympians, and other sailing greats. Benjamin was this year’s Championship of Champions special guest. He was named US Sailing’s 2015 Rolex Yachtsman of the Year for his win at the 2015 Etchells North American Championship and runner-up performance at the Etchells World Championship. Benjamin may have bested his 2015 results in 2017 following his win at the Etchells World Championship in San Francisco just over a week ago.

Day 2 of Racing for the Jack Brown Trophy is under postponement due to light wind and fog #cofcsonar pic.twitter.com/69WK4qZgNq

This Championship, inaugurated in 1976, is held in a different location and in a different class each year. Classes in which the event has been held run the gamut from conventional to cutting edge and have included Stars, Y-Flyers, Snipes, Hobie Cats, J-24s, Sunfish, Lightnings and Etchells, to name just a few. The championship trophy is named in honor of Jack Brown who was noted for his service as a judge, regatta organizer and member of US Sailing Committees.

The 2017 Championship of Champions is a US Sailing National Championship, sponsored by Gill North America.