By Stu Streuli, US Sailing

Europe hasn’t always been kind to young American sailors. It takes some time to get accustomed to competing on the Continent. But this past July generated substantial optimism for the future of U.S. Olympic sailing, with Olympic Development Program athletes bringing home a pair of podiums and a number of other noteworthy finishes from the summer’s biggest events. 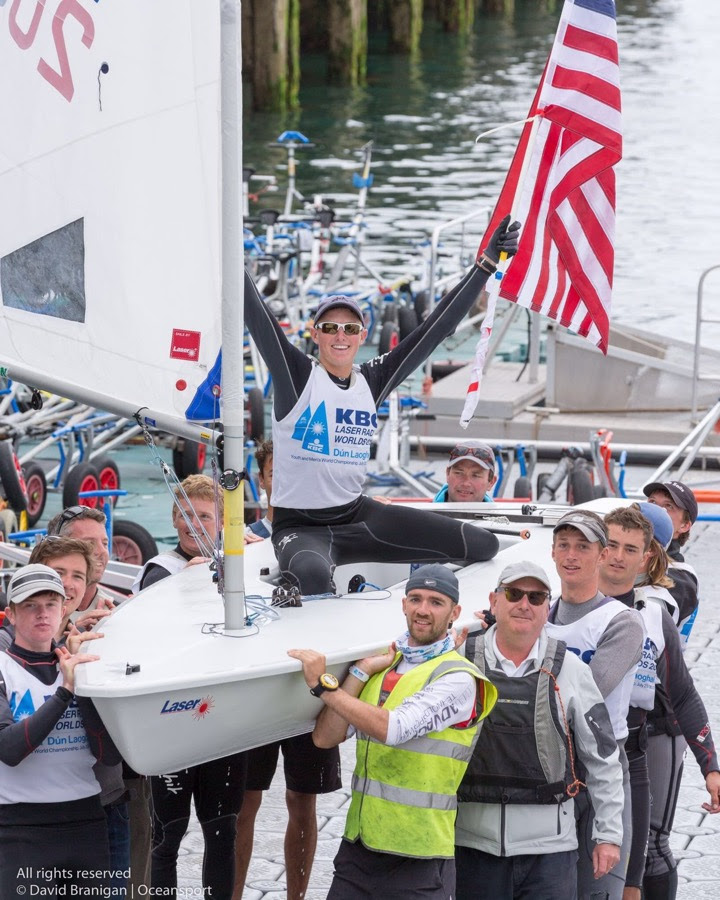 Marshall (at right) dominated the qualifying rounds, but struggled in the first two Gold Fleet Races, dropping out of first place. “Heading into the last race, I was mostly just happy to be in the mix for gold,” said Marshall. “I’d lost my lead in the shifty conditions, and there was just so much riding on each race.” Marshall took second in the final race, while his primary competition, Ireland’s Ewan McMahon, produced his second-worst finish of the regatta. The net result was a gold for Marshall.

Marshall served as a training partner for U.S. Olympic Team member Paige Railey during her build-up to the Rio Olympics. “We’ve been putting in so many hours of work, and all of that was put to use [this week],” he said. “[Paige and coach Mark Littlejohn] really took me under their wing. It’s been great to see how much professionalism the team has, from boat work to racing to the gym, and all the other pieces that make you elite. I’ve been soaking up as much as I can.

“I’m excited about the ODP, and so is everyone else. This is a rising movement, and America is getting to the top of youth sailing. That will follow through on the Olympic level.”

Like Henry Marshall, the American team of Wiley Rogers (Kemah, Texas) and Jack Parkin (Riverside, Conn.) had to overcome some mid-regatta disappointment en route to a silver medal at the International 420 World Championships in Sanremo, Italy.

“We had one of our best qualifying series internationally,” said Rogers. “We just had a couple of hiccups during the middle of gold fleet. We experienced some new breezes that we hadn’t seen and had trouble getting off the starting line.”

They knew they had the potential to win. A month earlier, Rogers and Parkin were nearly flawless in taking the gold at Kiel Week. A bit of soul searching, with three races remaining in the world championship, helped them rediscover their groove.

“We kind of looked at why were we there, which was to compete with the best of the best and duel it out for the top spot in the world,” said Rogers. “We decided to put a little more risk into our starting and we got some good breeze in last three races, which really helped us. We like the breeze.”

Rogers and Parkin closed the regatta with a 1-2-2, which boosted them into second place, and earned the honor of being the top team, age 18 and under, at the regatta.

Rogers and Parkin also credited the ODP and the opportunity to work as training partners for members of the U.S. Olympic Team, in this case the Women’s 470 duo of Anne Haeger and Briana Provancha. 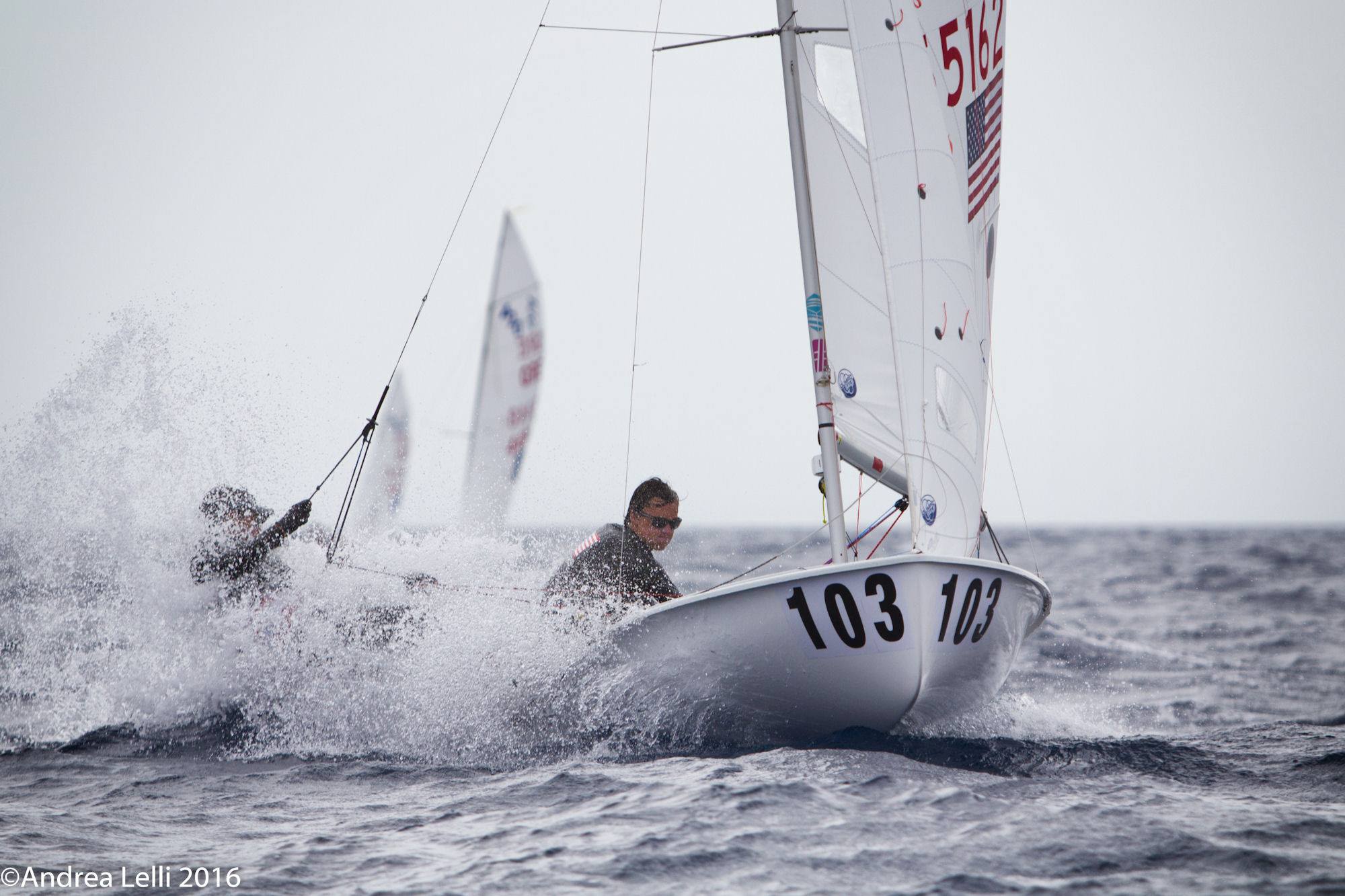 We really like how we have the ODP camps and when they have them they usually have a regatta series, which we really enjoy, it just keeps that competitive fire going,” said Rogers. “Getting us down to Rio with Annie and Briana, which was hopefully beneficial for them, was super beneficial to us. You get to hear a lot of different points of view and you get to pick what works for you. It’s good to hear new thoughts once in a while. You definitely get that with the ODP, whether it’s workout routines or preferences on equipment or technique.”

A third European-based world championship, in the 29er class at Medemblik, the Netherlands, saw the U.S. contingent sail well in the qualifying rounds—placing three teams inside the top 10—but falter in the championship flights.

“The 29er team was very well prepared for the Worlds and showed it after 10 races with great performances,” said Spina. “On the last three days of the event, conditions became very light and unstable and our sailors struggled in that particular condition—as did the rest of the fleet, judging from the high overall scores—but we remain really excited about were we stand. It’s simply the nature of our sport, some times you fall short of your goals. We take it as a motivation. We are looking forward to the 2017 Worlds in the United States. This open event will be a great opportunity for young sailors to race a high performance world championship in home waters.”

While U.S. sailors and the world at large turns its collective eye to Rio (click here for a viewing guide to the 2016 Olympic Regatta), Spina and his team will keep focused further down the road, including the 2016 Youth Sailing World Championships in Auckland, New Zealand, in December. Qualifying for the U.S. squad for that regatta will take place at the US Sailing Youth Championships, which start Friday at the Coronado (Calif.) YC.

“The combined results of 2015 and 2016 mean simply that U.S. sailors know how to compete at the highest level in youth sailing,” said Spina. “A lot of effort is being put in by sailors, families, and private coaches; and the ODP is leading the effort. We are on track. In 2020 and 2024 we will see some of these sailors competing at the top.”

About US Sailing’s Olympic Development Program:

US Sailing’s Olympic Development Program (ODP) was launched in January 2015 to lead the progression of the most promising youth sailing talent in the US. Guided by the US Olympic Sailing Committee’s Project Pipeline strategic initiative, the ODP fosters an integrated approach to training in the core development and Olympic classes, and is part of a system to provide the United States with a steady stream of well-prepared sailors. Some of these athletes will go on to represent Team USA at The Olympic Games, and provide the national team with consistent success. The fundamental premise of the ODP is to focus on the critical transition from youth sailing to high performance racing in Olympic classes. The ODP is funded through generous donations by individuals and organizations. The lead gift as well as a matching grant has been provided by the AmericaOne Foundation, and the US Olympic Sailing Program is actively seeking supporters to meet this generous match.  For more information on the ODP and the America One Match campaign, please visit www.ussailing.org/olympics

The United States Sailing Association (US Sailing), the national governing body for sailing, provides leadership, integrity, and growth for the sport in the United States. Founded in 1897 and headquartered in Portsmouth, Rhode Island, US Sailing is a 501(c) (3) non-profit organization. US Sailing offers training and education programs for instructors and race officials, supports a wide range of sailing organizations and communities, issues offshore rating certificates, and provides administration and oversight of competitive sailing across the country, including National Championships and the US Sailing Team Sperry. For more information, please visit www.ussailing.org