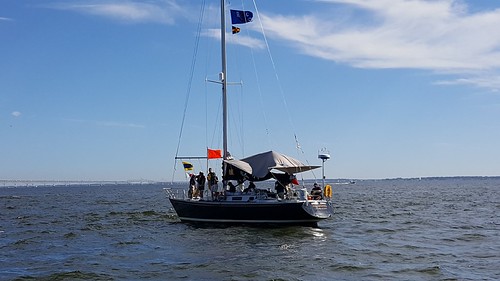 ANNAPOLIS, Md. (September 24, 2017) – The 10 teams racing in Navy 44 sloops at the 2017 U.S. Offshore Sailing Championship, hosted by the U.S. Naval Academy Sailing Squadron, completed their third and final day of racing on Chesapeake Bay in the best conditions of the weekend. After just three races, on Friday and Saturday combined, including two distance races and one buoy race, Sunday’s flurry of shorter buoy races were critical in determining this year’s winner of the Lloyd Phoenix Trophy.

“We are ecstatic to win this Championship,” said Kennalley. “We were optimistic about Sunday, because buoy races are our strength, so that was our best shot at holding on to our lead. It was really challenging conditions to try and get races off, but they did it in light air and big current, so major props to them for sure. We’ve got a wonderful team and that’s why we win at home and that’s why we won here this week.”

“Having a Midshipman on the team was great. We had Ryan Pinch and he was fantastic and a great addition to the team. He was willing to do anything and he did a lot,” added Kennalley.

There was a three-way tie for second place at the end of the Championship and the scorers had to go deep into the tiebreaker scenarios to sort out the standings. Chris Lewis (Houston, Texas), Theodore Papenthien (Annapolis, Md.), and Glenn Doncaster (Raleigh, NC) all finished with 34 points – four points behind Kennalley. All three had won a race. Lewis and Papenthien had won a distance race and buoy race, while Doncaster won a buoy race but not a distance race, so he dropped to fourth place overall. Lewis and Papenthien each had a third place finish, and Lewis got a fourth place but Papenthien did not, so his team dropped to third place for the Championship.

The race committee attempted a seventh race, which may have avoided a complicated tiebreaker. However, the wind was slowly diminishing with a strong ebb building up forcing the committee to call racing.

On Friday, a high-pressure system controlled the conditions over the Bay leaving little breeze for most of the day. The Championship launched with a 15-mile distance race. Due to a weakening northeasterly breeze throughout the race, the fleet could only get two legs completed. By the time the boats approached the finish line, the current was the leading force behind the boats completing the race, and several boats missed the line. Papenthien’s team was successfully able to work the middle of the course to win Race 1.

The race committee moved the course and found more breeze near Greenbury Point. However, the boats couldn’t finish the first leg due to a lack of breeze and the buoy race was abandoned.

With improved conditions on Saturday, the committee started three races and completed two. They ran a buoy race in the morning, a distance race in the afternoon, and attempted a third race but it was abandoned.

Doncaster went “coast-to-coast” to win the four-leg buoy race two. In the 20-mile distance race, the fleet started out towards White Hull Bay in a short weather leg, and then from Thomas Point Lighthouse across the Bay to Bloody Point on Eastern Shore to Tolly Point for the finish. Lewis won race three.

The third race got off to a good start in 8 knots. However, the boats were working against maximum tide and as the breeze died the tide took over.

The Championship focused on the core fundamentals of offshore racing. Teams were challenged in the areas of navigation, boat handling, teamwork, and basic fleet racing skills. The competing teams are representing each of the US Sailing Areas and were seeded through Area eliminations or by sailing resume, plus one U.S. Naval Academy team. Each team consisted of a crew of eight, including one skipper, six crew members, and one U.S. Naval Academy Midshipman from the varsity offshore racing team. Teams must have competed in at least five IRC, ORC, ORR, PHRF, Offshore One Design, Offshore Level Class Racing or Portsmouth Numbers rating systems in its respective Area during in the past 18 months. Competitors List

The 2017 U.S. Offshore Championship is sponsored by Gill North America and Old Pulteney.

Racing complete for the 2017 US Offshore Championship for the Lloyd Phoenix trophy boats heading in #offshorechamps17 #usnasailing pic.twitter.com/SersB7erle

Final day of racing for the Lloyd Phoenix US Offshore Championship #offshorechamps17 pic.twitter.com/3UhmCBjwvJ

Start of race 3 of the day and race 4 of series Papethien/midshipmen and Mcganty with the lead at the start #OffshoreChamps17 pic.twitter.com/c1sfCYwF9q

Fleet of 10 Navy 44 Sloops are sailing a distance race of 12.5 nm with a 4.8nm beat as the last leg #offshorechamps17 pic.twitter.com/tLQIOoxNik

About Old Pulteney
Old Pulteney Single Malt Scotch Whisky is strongly rooted in the whisky’s nautical heritage and is commonly referred to as ‘The Maritime Malt.’ Old Pulteney is the Official Scotch of US Sailing and recently released a limited-edition ‘Navigator’ expression, commemorating the brand’s sponsorship of the 2013-2014 Clipper Round the World Yacht Race. Crafted in Pulteney Distillery in Wick, Scotland, the distillery was founded in 1826 by James Henderson in the heart of “Pulteneytown,” one of the largest fishing ports in Europe. Each Old Pulteney expression is carefully crafted and carries the windswept and rugged character of the North and the salty, fresh air of the North Sea. It is distributed by International Beverage, Inc. Visit Old Pulteney on Facebook or at www.oldpulteney.com for more information.