Wood receives an invitation to the 2017 Governor’s Cup on July 17-22 at the Balboa Yacht Club in Corona del Mar, Calif. and qualifies for the 2017 Oakcliff Halloween Invitational on October 28-29 at Oakcliff Sailing in Oyster Bay, N.Y. The Nick Scandone Sportsmanship Award was awarded to the team of Porter Killian, John Horton (Newport Beach, Calif.), Robert Garrett (Newport Coast, Calif.) and Victoria Thompson (Newport Beach, Calif.), after receiving votes from their fellow competitors.

In the round robin, each team raced six or seven matches on Friday and completed the stage on Saturday. Killian took control of the number one ranking with eight points through nine races. The top eight teams advanced to the quarterfinals.

In its brief, yet impactful history on the match racing circuit this invitational event for 16 to 20 year olds has served as an outstanding training ground for young sailors who are passionate about match racing and focused on competing at the next level.

Ten teams of four, consisting of at least one female crew per boat, raced in the J/22 this week. Coaching and instruction played a major role in these sailors’ experience this week in Fort Worth. Five-time U.S. Match Racing Champion, Dave Perry, along with Mike Pinckney and two-time Rose Cup winner Christophe Killian conducted a North U Advanced Match Racing Clinic on Wednesday and Thursday of last week. The Clinic included long days of training on the water, presentations on all aspects of match racing with video debriefs.

“This was by far one of the best youth match racing events I’ve ever seen,” said Perry. “The Fort Worth Boat Club did its usual amazing job, the race management was perfect, and the 40 competitors, including 11 girls, competed at a high level.”

Originally known as the Rose Cup, this event was founded by members of the Balboa Yacht Club and the Newport-Balboa Sailing & Seamanship Association (NBSSA), and was started as an invitational youth match race event in 2010. The mission is to promote youth match racing in the U.S. and improve the skills of racers from around the country in national and international competition. In 2015, US Sailing elevated the Rose Cup to an official US Sailing National Championship.

This regatta was the first of two US Sailing National Championships in the match racing discipline this year. Oakcliff Sailing will host the U.S. Match Racing Championship in October. 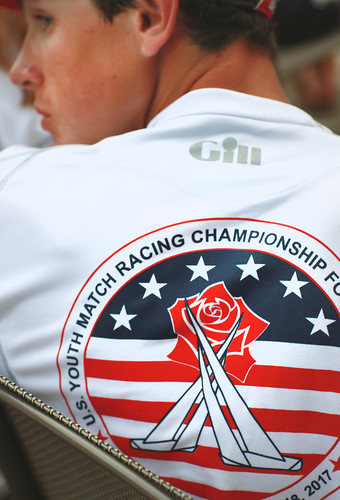 US Sailing’s “This is what we do” series: Dave Perry on Match Racing