REDWOOD CITY, Calif. (August 12, 2019) – Sunday’s finale on San Francisco Bay capped the third and final day of racing at the 2019 Chubb U.S. Junior Sailing Championships, hosted by the Peninsula Youth Sailing Foundation (PYSF) and the Club at Westpoint. The nearly 100 sailors representing their respective US Sailing Areas and home sailing organizations enjoyed spectacular and challenging conditions throughout this US Sailing National Championship.

Foox placed in the top three in eight of nine races with a sixth place finished being his worst drop score. He finished second in race nine on Sunday to earn the win. The Laser Radials completed two races Sunday, three on Saturday, and four on Sunday.

“I sailed my drop in the first race today and so did Daniel,” said Foox. “We were battling for the top three positions the whole regatta. It was a stressful day of sailing, I knew I had to put a boat between Daniel and myself and hope that Caleb would drop back. It was light and got tricky. Towards the end I had a boat between Daniel and I, not knowing he was over, and he passed that boat, and I thought I lost the regatta.”

This event is sponsored by Chubb Insurance Group and Zim Sailing. Chubb, a long-time supporter of this championship and youth sailing, has been title sponsor of the U.S. Junior Sailing Championships for over a decade. 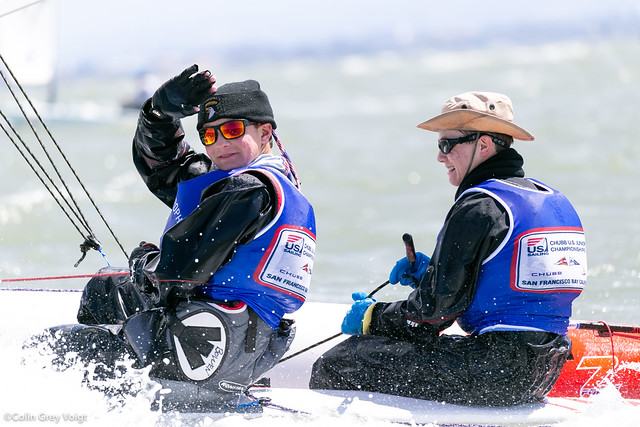 Sunday is the last day of racing at the Chubb U.S. Junior Sailing Championships. Our best to all the competitors! @ussailing #ChubbChamps19 #sailing pic.twitter.com/nHyOmPfPNq

Those goggles 🥽 tho…💥Day 1 of racing at the Chubb US Sailing Junior Champs was BREEZE ON! Check out the current standings ⬆️ link in bio. ❤️📷 @colingrey

Those goggles 🥽 tho…💥Day 1 of racing at the Chubb US Sailing Junior Champs was BREEZE ON! Check out the current standings ⬆️ link in bio. ❤️📷 @colingrey

These highly-skilled young sailors representing their home yacht clubs or local sailing organizations are eager to test themselves against their peers from around the country in single-, double-, and triplehanded competition.

First sailed in 1921, sailors compete regionally to earn an opportunity to race at this championship in one of three fleets. Competing sailors range in age between 13 and 18. Each Area is eligible to send at least one sailor/team to compete in each of the fleets for the 2018 event:

The top three eligible athletes in the singlehanded fleet will receive early acceptance to the 2020 U.S. Youth Championships.

“The Chubb U.S. Junior Championships has a rich history, with many of sailing’s greats having competed over the years for the Sears, Bemis, and Smythe trophies,” said John Pearce, Youth Director at US Sailing. “This regatta draws top talent from the regional level and gives them the opportunity to be a part of a great tradition, while also learning from top coaches and looking ahead to the highest levels of the sport. It’s a special event, and I’m particularly excited that the Sears Cup is being sailed in a very modern design this year, the Open 5.70, which will really challenge the competitors.”

Sailors are taking part in onshore and on-water clinics with a collection of top coaches from around the country on Thursday, August 8 to hone their skills and acclimate themselves to the racing conditions and the boats.

The following coaches are on site working with the sailors throughout the championship: