In a climactic conclusion Friday afternoon in J/70s on Lake Avándaro, the team representing the American Yacht Club (Rye, N.Y.), led by skipper Megan Ploch (Pelham, N.Y.), edged the competition in a closely contested Championship Round. They began the day in third place. With the win, they earned the right to compete at the 2018 Sailing Championship League World qualifier.

Emily Maxwell (New York, N.Y.), Elizabeth Dudley (Boston, Mass.), Avery Field (New York, N.Y.) and Katy Nastro (Huntington, N.Y.) finished third. The racing was so tight in race six that any of four teams could have finished second through fourth. Flores had 17 points, and Maxwell was tied at 19 with Giselle Camet (San Diego, Calif.), so it was anyone’s race to take. In the end, Maxwell just edged out Camet on the final run to secure the Bronze medal.

To ensure fast and competitive racing, the round robin format for the championship featured team rotations after every five races. Each team raced an equal number of races against the other teams. Races were approximately 15 minutes in duration. The racing featured quick rotations and on-the-water umpiring, in addition to a quality viewing experience for spectators.

This year’s Championship consisted of 10 teams overall, including seven from the United States, two from Mexico and one from Canada. The two Mexican teams excelled in the Qualifying Rounds, placing first and second overall. The top four teams from the Qualifying Rounds automatically advanced to the Championship Round on Friday. Thursday’s racing wrapped up with the Repechage Round featuring the bottom six teams sailing for the last two spots. Advancing teams carried a “virtual” race result that reflected their ranking going into the Championship round. The Championship Round consisted of six races, each team sailing each J/70 sailboat once. Competitors List

The top six teams entering the Championship Round:

The lake sailing venue framed by mountainous land formations offered new and exciting challenges to the competitors. Conditions this week were spectacular with a SW breeze and 5 to 14 knots of breeze daily. Each day the threat of an afternoon thunderstorms was a reality, as evidenced by Thursday’s last race of the Repechage Round being cancelled due to thunder and lightning. The hospitality and friendship shown by the local hosts was truly outstanding, as was expressed by the competitors and race organizers.

For more information about the 2017 International Women’s Keelboat Championship, including results and standings, real-time updates from the race course on Twitter (#womenskeelboat), news and coverage, photos, videos and more, please visit the event website. 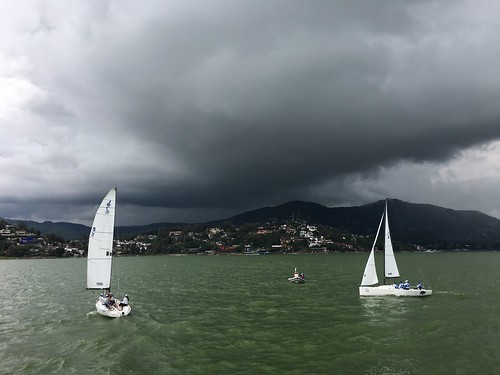 It is 12:20 here in Valle de Bravo, and the girls are waiting for the wind to fill in! #womenskeelboat pic.twitter.com/I1z7dGKo1e

The sailing conditions for the moment: 10-13 knts of wind coming from the Southwest along with small chop. #womenskeelboat stay tuned! pic.twitter.com/1A4UOYUlvu

Another Rainy Day! ☔️. And the race officials have called it off. Stay close to see the results! #womenskeelboat #iwkc pic.twitter.com/iVv8UmAVGf

Tune into our story down in Mexico today as we follow @katy_nast on Day 3 of the Women’s International Keelboat Champs in Valle De Bravo! ⛵️#IWKC #neverstopexploring @womenskeelboat : @katy_nast

The 2017 International Women’s Keelboat Championship is a US Sailing Championship sponsored by Gill North America.